Marcus and I had a busy summer, what with holidays, hospitals, hacks (days/weeks/camps) and house moves. I’d like you to accept this post with our apologies for being relatively quiet recently. Now, without further ado, here’s an update on all things NHSbuntu.

Back in June we were invited to join the NHS Digital Delivery Team for a Hack Week. This was an invitation not to be passed up! Over the week an open source Identity Agent took shape and by the Friday there was a working prototype. Our efforts over the week won the popular vote too!

Read the Hippo Digital blog - A Hippo sized bite - about the significance of an open source Identity Agent.

Shout outs to ramensen, cian, Brett, Alex for hacking with us.

The Register wrote a Special Report “Ubuntu ‘weaponised’ to cure NHS of its addiction to Microsoft Windows” about us. For some reason this article really got readers fired-up as the post attracted nearly 300 comments! 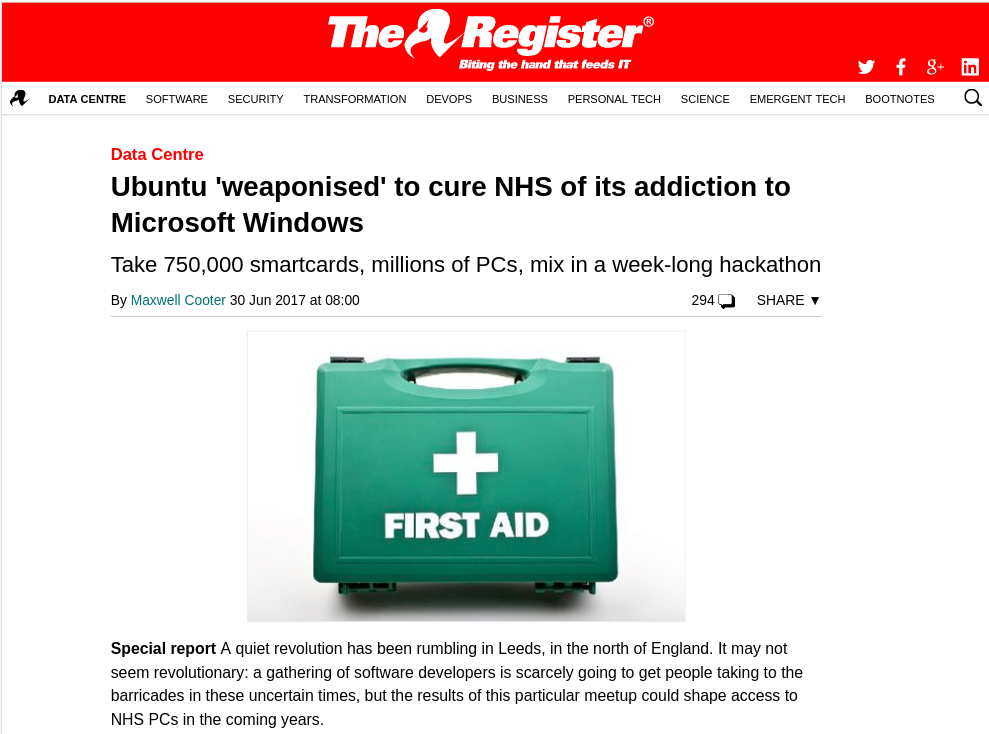 A spot of bother.#

Behind the scenes we’ve been in a spot of bother with the Department of Health NHS Brand Police. When Marcus and I started this project, we knew that blending by NHS & Ubuntu together we’d a) quickly explain exactly what the thing was; b) be likely to get in trouble with Canonical or the DoH. And so it came to pass that Canonical were totally fine with the remix and the DoH were not.

We’ve had several big names in open source get in touch with us.

Canonical approached us after the El Reg article. We’ve discussed becoming an Official Ubuntu Flavour and using the Canonical tools to make our lives easier and the build faster.

RedHat have also been in touch recently. Talking with them has made us think about becoming a cross-distribution project. Watch this space!

Cisco invited us to collaborate in a healthcare ‘alternative desktop’ demonstrator. This could lead to a significant pilot in at an NHS Trust. Fingers crossed!

Hashicorp are getting behind us, supporting us with sponsorship and access to the cloud services they offer. We’ve been using Vagrant and Packer in creating NHSbuntu, so support from them is most welcome.

Chocolatey are also getting involved. Hopefully we’ll be able to offer an official N3 hosted package repository for applications widely used on MS desktops in the NHS.

Renaming the project We’ve started to rename ourselves as NHoS. You may have already noticed that our website and twitter name have changed. Please bear with us while we tranisition many things.

We’ve had loads of messages of support and encouragement over the last few months. We appreciate it. Thank you.