At one of the Guardian sponsored fringe events surrounding the Liberal Democrat conference in Bournemouth yesterday, Sarah shared the stage with Nick Clegg, Mark Oaten and Sir Menzies Campbell debating Liberty or Equality?

Anyone blogging from the LD conference attend?

“Ms Teather, the party’s victor in last year’s Brent East byelection, suggested a compromise of “licensed smoking bars” if a public ban on smoking comes into force, while Sir Menzies, fresh from his barnstorming conference speech on foreign policy, suggested introducing a “civil liberties audit” against which all future incursions on citizens' rights be measured.” - Guardian

The LDs announced yesterday that they would opose David Blunkett’s proposals to ban civil servants from membership of the far-right British National party (BNP). On this issue Sarah said “If it’s a legal party we can’t ban people from being a part of it.”

All four panellists ended up choosing liberty over equality. 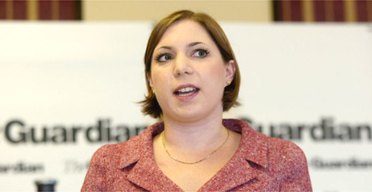 Simon Hoggart writes that “Sarah Teather MP, who has clearly learned a lot about her party in a short time, said that if God had been a Lib Dem, the ten commandments would have become the ten suggestions.”