The voters of Brent have returned Lib Dem Sarah Teather with a majority of 1,345, a swing of 11% from Labour, and Labour’s Barry Gardiner with a majority of 8,028, loosing 2.5% of the vote to the Conservatives (+2.2%) and other parties. I was at the count on Thursday night tally marking for the Lib Dems and in-between boxes of ballot papers talking with candidates and journalists about the political economy of Brent as a borough. And still there at 11:30 on Friday morning when the results were announced! I didn’t have the stamina for the Local Election counts though!

It was a long and tense night with some low drama at the first validation following the ballot paper mixup in Willesden Green and the re-routing of the Hampstead and Kilburn ballot boxes via Camden. The ballot counters of Brent Council worked really hard, first collating and validating the ballot papers, then counting the ballots cast. Tally Teams from Labour and the Lib Dems jostled politely for space to count the Brent Central ballots as they were sorted, while at the Brent North tables it was Labour and Conservative Teams that rubbed shoulders. By 530am, both Labour and the Lib Dems were looking tense, each thinking their candidate had just clinched victory. As the Harrow Observer report, ‘Labour [believed] Dawn Butler, the former MP for Brent South, [was] two per cent ahead in terms of number of votes, or just one ballot paper in every 50.’

Brent North was announced first, with Barry Gardiner warning against Labour “starting a new love affair” with the Lib Dems so soon after being rejected by the electorate, saying he was “deeply distrustful” of the party. 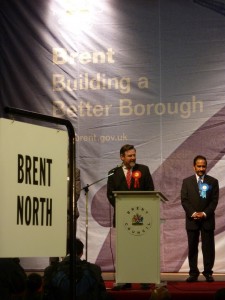 In Sarah Teather’s victory speech she thanked the people of Brent for renewing their trust and faith in her, promising to continue her work as a constituency MP. 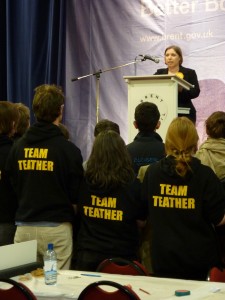 Dawn Butler quoted Maya Angelo in her valediction to the assembled: “You may write me down in history, With your bitter, twisted lies, You may trod me in the very dirt, But still, like dust, I’ll rise.”

Does she not recall who was caught out spreading ‘bitter twisted lies’ to the electorate?

Shahrar Ali thanked the Green voters, saying that with the direction of travel for politics there will come more Brighton Pavilion victories in the future. 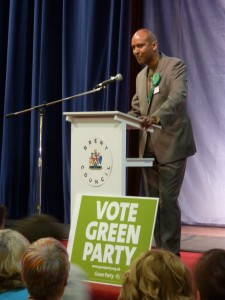 Click here for all my photos from the night.